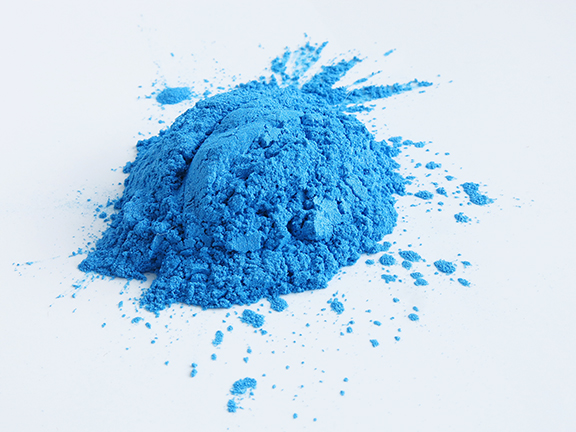 Spirulina is grown in ponds that promote the production of phycocyanin.  The spirulina is harvested.  The cell wall of the spirulina is ruptured with mechanical force and the phycocyanin (a very large, very complex protein) is isolated using centrifugation.  The extract is immediately dried and/or frozen.

Spirulina develops a light blue or “sky blue” or “baby boy blue” color.  Spirulina does not develop a deep “Navy blue” color.  Spirulina blue is generally accepted in foods worldwide, with some countries limiting its application.  In the US, spirulina is permitted in confections (including candy and chewing gum), frostings, ice cream and frozen desserts, dessert coatings and toppings, beverage mixes and powders, yogurts, custards, puddings, cottage cheese, gelatin, breadcrumbs, ready-to-eat cereals (excluding extruded cereals), coating formulations applied to dietary supplement tablets and capsules, at levels consistent with good manufacturing practice.  At present (2020), spirulina is not permitted in foods in Canada.  In the EU, spirulina is a “coloring foodstuff” that may be used in foods generally.  As a coloring foodstuff, spirulina does not have an E number because it is not considered an additive.  Spirulina may be mixed with natural yellow colors such as turmeric to create natural green colors … which brings us full circle back to the 1970s!