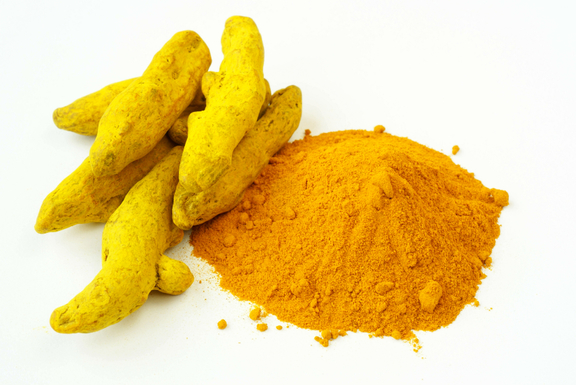 The bright color of curry in the cooking of India is turmeric. The color, sometimes called curcuma, is a fluorescent yellow extract from the roots of several species of the ginger family, Zingiberacea, with the one most often used commercially being Curcuma longa. The plant, cultivated since ancient times, is native to southern Asia, India being a major producer. The plant grows a thick rhizome with short blunt "fingers." The fingers are collected, cleaned, and dried for extraction. The major chromaphore of the extract is called curcumin. Turmeric is available commercially in two basic forms — oleoresin and as curcumin powder. Both can be kosher and halal certified.

Turmeric oleoresin is produced by extraction with ethanol, which is then removed by vacuum distillation. It commonly contains 30 to 50% curcumin and has the appearance of a dark colored liquid. The oleoresin can be standardized, has low microbial load and is free of extraneous contaminants. The flavor components in the oleoresin are usually in the same proportion as found in the spice. The oleoresin usually contains 5 to 15% curcumin. Deflavored oleoresin can also be produced.

Curcumin powder is deep orange yellow of around 95% purity. It is produced by grinding the dried fingers. The powder is insoluble in water and other solvents but the addition of a food-grade emulsifier (such as propylene glycol or polysorbate), makes it functionally soluble. ColorMaker can provide this liquid form of turmeric, preferred by manufacturers due to its miscibility in water.

The emulsified form has an intense color (about 4 times that of a typical FD&C dye) and a small amount, in the range of 5 to 20 ppm, is sufficient to color a product system. Turmeric has the closest hue to FD&C Yellow No. 5 and is a viable substitute. A major limitation of turmeric extract is its instability to light. It has good thermal stability and is not affected by pH until the system is quite alkaline. It complexes with protein, is highly resistant to oxidation and is believed to have antioxidant properties equivalent to BHA/BHT. The presence of cations appears to move the color to orange-brown. In acidic systems, the color is lemon-yellow with a characteristic green florescence. As the pH increases, the green tint diminishes and ultimately the hue becomes orange.

Turmeric is used in product systems that are packaged to protect them from sunlight. The oleoresin is used for oil-containing products. The curcumin/polysorbate solution or curcumin powder dissolved in alcohol is used for water containing products. Over-coloring, such as in pickles, relishes and mustard, is sometimes used to compensate for fading. Turmeric has found application in canned beverages, baked products, dairy products, ice cream, yogurts, yellow cakes, cookies, popcorn-color, candy, cake icings, cereals, sauces, gelatins, direct compression tablets, etc. In combination with annatto, it has been used to color cheeses, dry mixes, salad dressings, winter butter, and margarine.