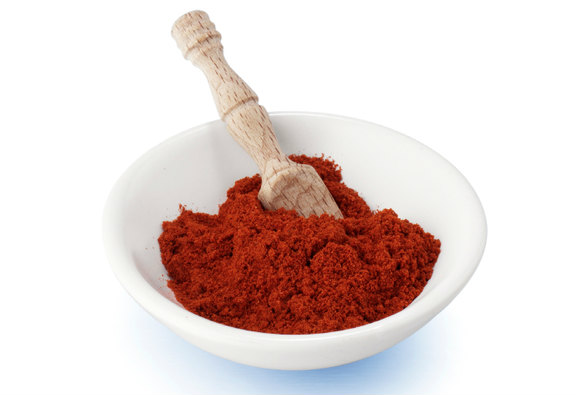 Paprika for color application is available primarily as an oleoresin. The oleoresin is made by percolating a volatile solvent (such as hexane) through dried paprika (whole, cut, or powder) -- the solvent being removed by vacuum distillation. The oleoresin is a viscous, highly colored substance containing xanthophylis, capsanthin, and capsorubin (the red component) and beta-carotene (the yellow component). The red pigments can be as high as 40-50% of the oleoresin. The oleoresin is standardized with vegetable oil to a color strength referred to as 40,000 and 80,000 CU (for "Color Units"), although higher units are also available. Some suppliers use an ASTA value (a measure of flavor extinction from the American Spice Traders Association) and 1000 ASTA generally equates to 40,000 CU. Several suppliers of paprika from India now routinely offer oleoresin of paprka in excess of 100,000 CU. Regardless the strength, the extract can be obtained kosher and halal certified.

Paprika oleoresin is insoluble in water and readily soluble in vegetable oil. It is made water dispersible by the addition of a polysorbate. In oil or fat-based food systems, paprika will give an orange-red to red-orange color, the exact hue of the oleoresin depends on growing and harvest conditions, holding / cleaning conditions, method of extraction and quality of the oil used for dilution and/or standardization. In aqueous systems, the red fraction (capsorubin) is overwhelmed by the yellow fraction (beta-carotene), making paprika appear far more "bright orange." The color of the end product will depend on amount of oleoresin used and its method of emulsification.

Paprika oleoresin is somewhat sensitive to light. Loss can be slowed by the addition of ascorbic acid, but its use does not appear to work in all systems. Even in the dark, color loss can be measurable, probably due to paprika’s susceptibility to oxidative degradation when exposed to air. The addition of antioxidants such as alpha tocopherol seems to help. One supplier has obtained a patent on the use of Rosemary herb extractives (a natural antioxidant) to improve the colorant’s shelf life, but success appears to vary.

Paprika is used to color oil based systems and comminuted systems. Examples of the products colored with paprika are: sausage type products, cheese sauces, gravies, condiments, salad dressings, baked goods, snacks, icings, cereals, shampoos, soaps, and lipsticks. Perhaps the most common use of oleoresin of paprika is in spice blends, where the oleoresin is used to color salt which, in turn, is mixed with spices and peppers to complete the finished spice blend.